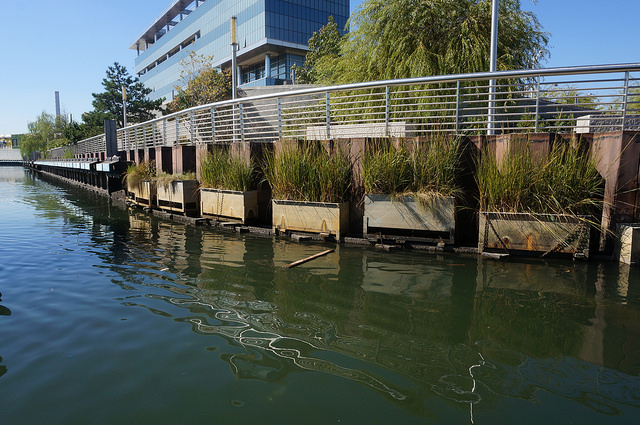 In a partnership with LaGuardia Community College and Outside New York, the Newtown Creek Alliance is pursuing innovative strategies to re-introduce elements of salt marsh habitat back into Newtown Creek.

In 2010 LaGuardia Professor Sarah Durand proposed attaching metal frames to house native salt marsh grasses on Newtown Creek. These native plants were placed where grasses would exist naturally and are helping to improve nutrient imbalances in the Creek. The project was selected by the City Parks Foundation to receive funding in 2011. Pilot plantings began in 2013. Hear WNYC piece with professor Durand about the project here.

With the assistance of LaGuardia environmental science students and trained volunteers from the North Brooklyn Boat Club, Newtown Creek Alliance has reintroduced salt marsh grasses that once covered much of area surrounding Newtown Creek. Native plant species not seen on the creek in the past 50 to 100 years are now back and thriving. The establishment of plants within the pilot frames, has successfully demonstrated the viability of reintroducing salt marsh grasses, an effort now being pursued by city and state agencies.

The Newtown Creek Alliance continues to pursue opportunities to re-introduce native plants to shorelines along Newtown Creek in a way that does not disrupt or displace current industrial uses.