NCA historian Mitch Waxman will be leading a number of tours of Newtown Creek in 2015. We will update this page as more tour details and dates are announced. 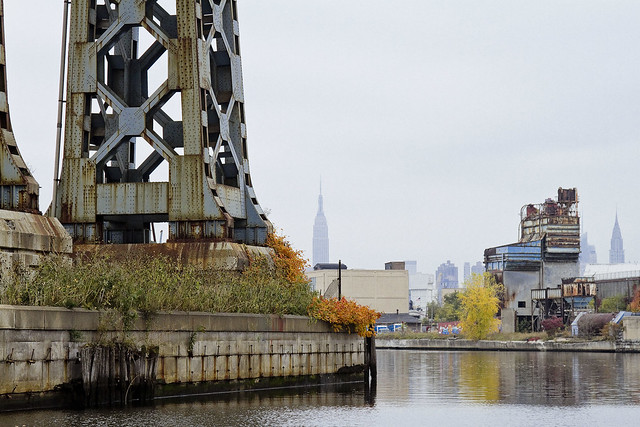 A 2-hour exploration of an area we like to call DUKBO- Down Under the Kosciuszko Bridge Onramp – where the waste transfer and petroleum districts of North Brooklyn are found along the bulkheads of Newtown Creek. This fascinating tour will take you through around 2 miles of Brooklyn, crosses the heart of the Greenpoint Oil Spill, and explores the fascinating history of industrial Greenpoint. We will be heading past the Kosciuszko Bridge, reconstruction project as well, but will check it out from a safe distance. Photographers, in particular, will find this an interesting trek across an industrial section of New York City. Buy Tickets Here.

August 2nd, Insalubrious Valley
Hosting Organization: Newtown Creek Alliance
Cost: $20
Following the currently undefended border of Brooklyn and Queens, we will be exploring the colonial, industrial, and environmental history of the borderland communities. We will encounter century old movable bridges, visit the remains of a 19th century highway, and explore two of the lesser known tributaries of the troubled Newtown Creek watershed. For the vulgarly curious, Conrad Wissell’s Dead Animal and Night Soil wharf will be described

July 12th, Glittering Realms
Hosting Organization: Newtown Creek Alliance
Cost: $20
A colonial center and 19th century industrial powerhouse, Greenpoint is a thriving neighborhood surrounded by environmental catastrophe which has been reborn in the 21st century. The walk will explore this ancient North Brooklyn neighborhood and its industrial history as we move inexorably toward the Newtown Creek. The area we will be moving through will be completely altered by real estate development in coming years, come take a look before everything changes. Buy tickers here.

June 7th, 13 Steps Around Dutch Kills
Hosting Organization: Newtown Creek Alliance
Cost: $20
In 13 steps, Mitch will show you the then and now of Dutch Kills tributary, once known as the “workshop of the United States.” A central maritime artery of Long Island City, Dutch Kills is surrounded by hundreds of factory buildings, titan rail yards, and crossed by century old bridges – and it’s found just a few blocks away from Queens Plaza. Buy tickets here.

May 2nd,  An Insalubrious Valley
Hosting Organization: Concrete Temple Theatre
Cost: $15
As part of their upcoming theatre production, The Bellagio Fountain has been Known to Make Me Cry, showing at Studio 301 at English Kills, The Concrete Temple Theatre is hosting a number of events related to Newtown Creek. This includes a walking tour with Mitch. Check out all the awesome weekend events and get more tour info here.