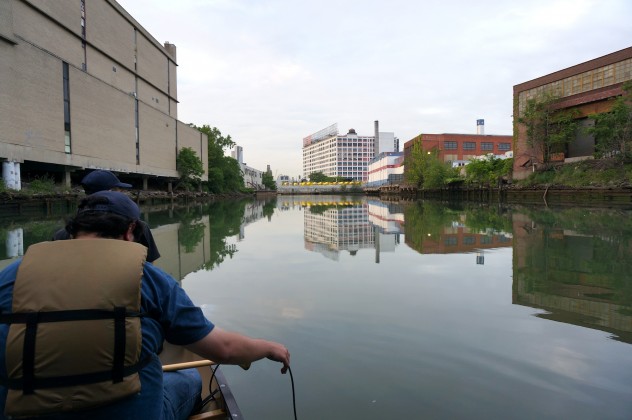 I have spent the last month and a half getting stares from people as I throw a bucket into Newtown Creek and pull up water. Occasionally people will take the time to stop and find out what I’m doing. Those who stop to talk will find out that I’m not pulling buckets of water out of the Creek for my own amusement, but to test the levels of dissolved oxygen in the water.

Now here’s where it gets interesting; the Creek has Combined Sewage Overflows, or CSOs for short, that discharge raw sewage when the capacity of the wastewater treatment plant is exceeded when it rains. All this raw sewage provides an abundance of resources for algae, and this causes an algal bloom. The large increase in algae cause the dissolved oxygen levels to increase, which is awesome for fish and other aquatic life that depends of dissolved oxygen. Once the sewage, and therefore nutrients, stops flowing, the algae quickly die off. This is where things take a turn for the worst,if you’re a fish. The process of decay uses oxygen, and as all the dead algae start to decay, the dissolved oxygen levels plummet.

Hopefully the data I’m gathering can provide useful information that will inform future decision making and help make the Creek a better place for the people for live and work nearby, and for the plants and animals that call the Creek their home.

About me:
I am currently a senior studying conservation biology at the State University of New York College of Environmental Science and Forestry (SUNY-ESF) in Syracuse, NY. While I may now call Syracuse home I am originally from Brooklyn and attended LaGuardia Community College. It was at LaGuardia that my passion for urban ecology and social justice was nurtured. Due to it’s proximity to LaGuardia, the Creek and the complex issues surrounding it, played a large role in my education.