Why We Oppose the Aeration Plan in Newtown Creek 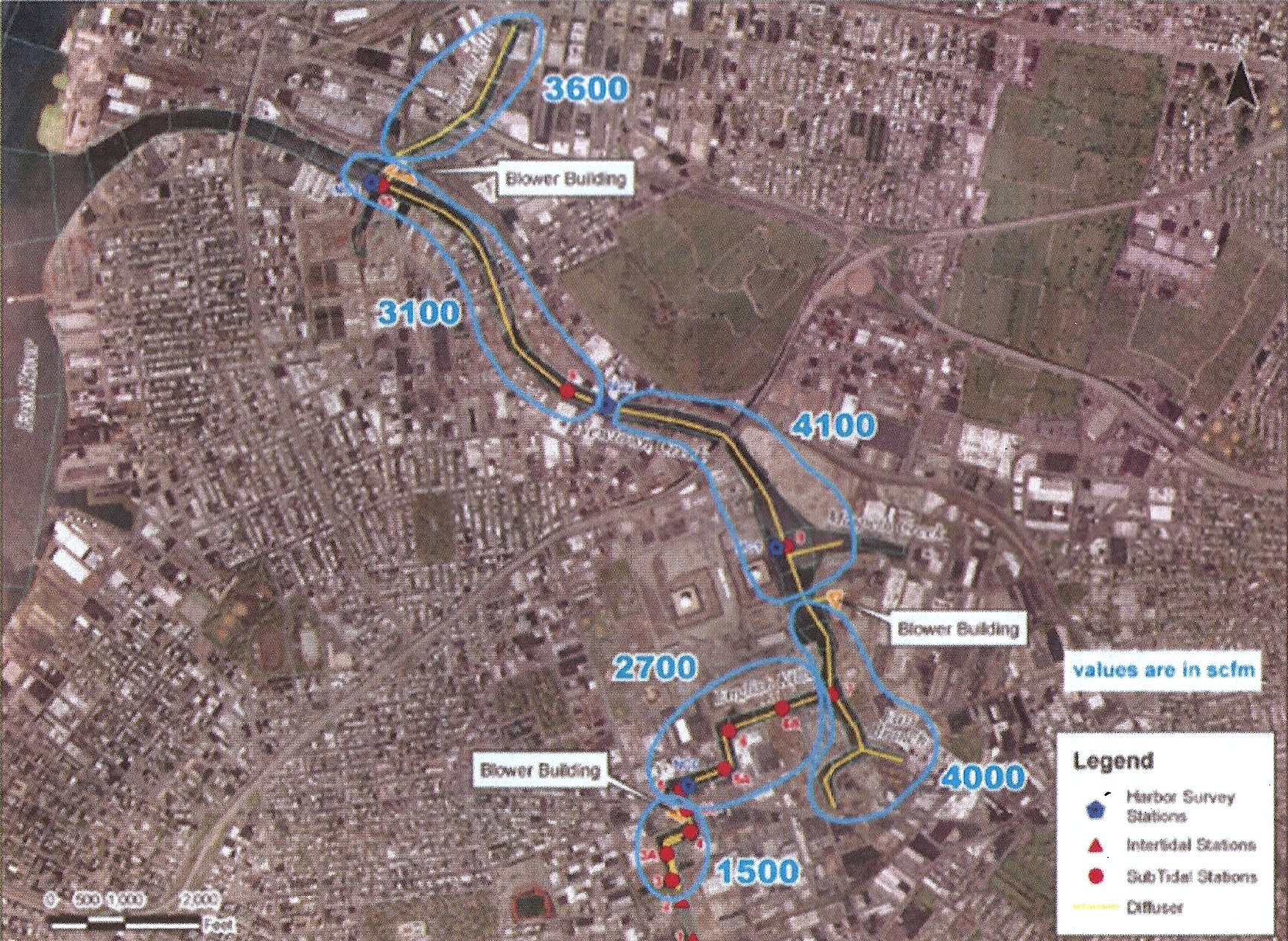 The New York City Department of Environmental Protection (NYCDEP) is in the process of expanding an aeration system within Newtown Creek. The project follows a consent order from the New York State Department of Environmental Conservation (NYSDEC) for the Creek to meet a minimum level of dissolved oxygen (never less than 3 mg/L). A pilot aeration system was installed in the head of English Kills a few years ago. The remainder of the system is currently under development, with the expectation that design, construction and operation will be completed within three years. Upon completion, the aeration system will extend along the Creek bottom for cover some 4 miles and thereby cover approximately 80% of its entirety. (see map above).

Newtown Creek Alliance, Riverkeeper and others expressed opposition to the plan when first announced in 2012. Studies conducted since then by a Columbia University researcher affirm that the aeration process can aerosolize waterborne bacteria and possibly other compounds that exist in the water column, potentially creating a public health risk to anyone living, working or recreating near or on the creek (Dueker et al). The NYCDEP and NYC Department of Health agree that a risk may exist, but have shown little interest in altering or delaying expansion plans until further research is conducted. We believe it is both reasonable and responsible to request of the NYCDEP that no measures are taken to meet the consent order that could pose a public health risk to the community. The Creek already imposes upon its surrounding communities a great burden of environmental damage and resulting health hazards. Why would the city seek to add yet another risk to public health?

In addition to public health, we have expressed concern over a number of other factors inherent in the aeration plan.  These concerns are as follows:
1. The project will cost approximately $115 million.  This significant financial investment addresses only a symptom of poor water quality, not the cause – namely, combined sewage overflows (CSOs). Aeration presents a short-term solution to resolve a mandate, not a long-term investment.
2. The aeration system will likely operate for only a limited number of years. Once superfund plans are finalized to dredge, cap or bottom fill certain areas of the Creek, large portions of the aeration system will need to be deactivated and dismantled.
3. The implementation plan stipulates that the aeration system should run continuously during warm weather months (May through September),  However, the pilot portion in English Kills has failed to run continuously during previous summers, an observation acknowledged by the NYCDEP. If the system cannot operate as planned, it is a poor investment of capital. If the system cannot accomplish what it was designed for, then it is a failed investment.

Newtown Creek, is not the only urban waterway in New York State to suffer depressed dissolved oxygen levels. The Gowanus Canal also faces a similar situation and has also installed an aeration system, although much smaller in scale than the proposed Newtown Creek project. The Gowanus system is based upon a different engineering model in which water is pumped from the canal, into an aerating device and then seamlessly back into the channel. Most importantly, the Gowanus system does not aerosolize particulates within the water column or bottom sediments. From a press release about the Gowanus system:

“First, a number of alternative systems were evaluated that would provide the required amount of aeration without causing secondary environmental issues and not obstruct navigation in the canal. Conventional aeration systems, including diffused and mechanical aeration, were considered but dismissed because of potential odor problems, disturbance of bottom sediments or obstructions to navigation.” (emphasis added).

Secondly, the NYCDEP is commended for both its support and development of green infrastructure initiatives within the Creek watershed and within the Creek itself. NYCDEP ecologist John McLaughlin offered examples of potential wetland installations to the Community Advisory Group for the Newtown Creek Superfund effort on February 6, 2014.  Wetland habitat not only functions to increase levels of dissolved oxygen, the purpose of the aeration system, but offers a far more expansive range of environmental services, including phytoremediation and zooremediation of pollutants and increasing biodiversity. Wetland remediation is a long-term solution to improved water quality. However, competing with the proposed aeration system will slow implementation of this long-term solution, given limitations on funding, time and construction space. Indeed, regions of the Creek most suitable for wetland construction, such as the Dutch Kills tributary, are also targets for the aeration system.

The NYCDEP owes an explanation to Newtown Creek communities for its dismissal of public health risks and its failure to discuss the above issues with the community organization that is designated by the Environmental Protection Agency to provide community input to the Superfund remediation process.

Development of the aeration system has proceeded without significant public intercourse or reasonable acknowledgment for our concerns. We therefore are obliged to request the following actions:

1. Delay further design, construction and operation of the aeration system until a proper study has been conducted to determine the effects on air quality and public health. As a community organization we need full confidence that the aeration does not create any additional health risks to those working, recreating or living on and/or near the creek.
2. Hold a public presentation on the expansion plans; the Brooklyn and Queens communities that border the Creek have not heard any of updates in the past two years on this significant project.
3. Conduct an assessment of alternative solutions that satisfy the consent order, but pose no potential health risk and take into account the superfund schedule and process.

We look forward to working with community members and local elected officials on this issue.