What’s Happening with the K-Bridge Demolition? 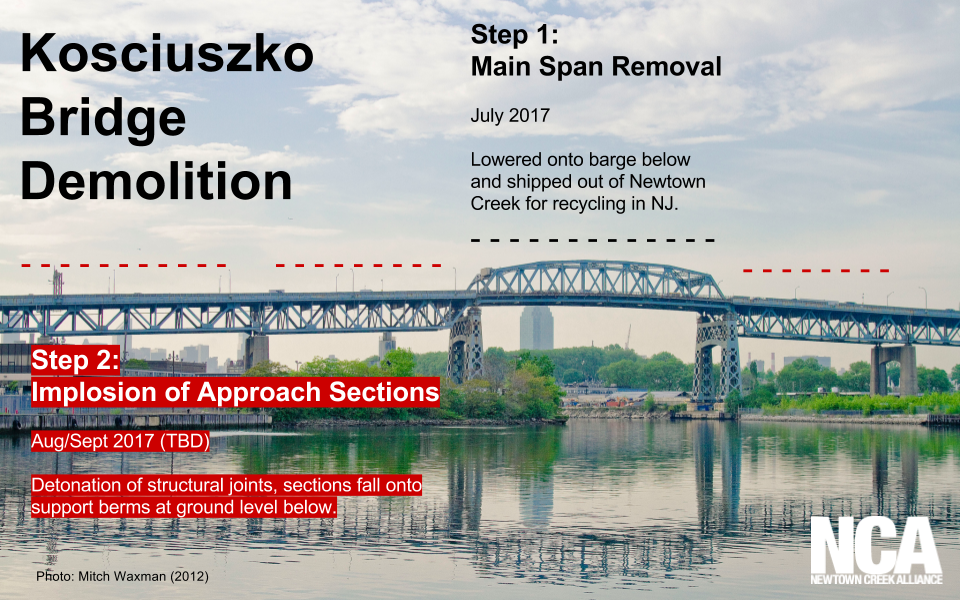 “We have just been informed that the contractor has completed the preparatory work needed for the implosion of the approaches to the old Kosciuszko Bridge.

If weather conditions remain favorable and there are no unanticipated complications in the field, the New York State Department of Transportation intends to proceed with implosion of the remaining portions of the old Bridge on Sunday, October 1, 2017, at 8:00 a.m.

We have no further details at this time but wanted to share this information with you as soon as possible.”

One of the main events on Newtown Creek this year will be the demolition of the existing Kosciuszko Bridge. Originally built in 1939, the original K-Bridge is in the middle of a major reconstruction project being overseen by the NYS Dept. of Transportation. NCA historian Mitch Waxman has put together some great documentation about this infamous structure; read more about the history of the bridge here.  In regards to the demolition here is some basic info about what people can expect this summer.

The Bridge will not be exploded over or fall into Newtown Creek.
The demolition is a 2-step process involving the lowering of the main span onto a barge and demolition of approach sections via implosion. The demolition process has been reviewed by numerous city, state and federal agencies to ensure that the procedure is safe and poses little to no harm to the environment. We do not anticipate that the demolition will introduce pollutants into Newtown Creek or disrupt underground pollutants in upland areas. See more info below regarding specifics of the demolition.

Lowering of the Main Span
Date: July 25th and 26th, 2017
The centerpiece of the bridge will not be exploded, imploded or end up falling into the Creek below. Rather the main span, which sits 125 feet above the water, is being lowered, in one complete section, onto a barge below. Once it is safely loaded and secured it will be barged out of the Creek and to a metal recycling facility in New Jersey. Given the size of the main span this will be a pretty phenomenal sight. The lowering process itself will take approximately 12 hours with additional time needed to secure the bridge to the barge. A maritime security zone on the Creek (to restrict boat traffic) will be in place during that time. If you have photos of the demolition process, please use the hashtag #byebyekbridge

Implosion of Approach Sections
Date: October 1st, 8am
Once the main span has been removed, construction crews will begin work on preparing for the demolition of the approach portions of the bridge. Preparation involves welding work on the structure itself and the creation of berms on the ground below to help absorb the shock and weight once the structures fall down. Be sure to stay clear of fencing off and secured areas during the implosion. 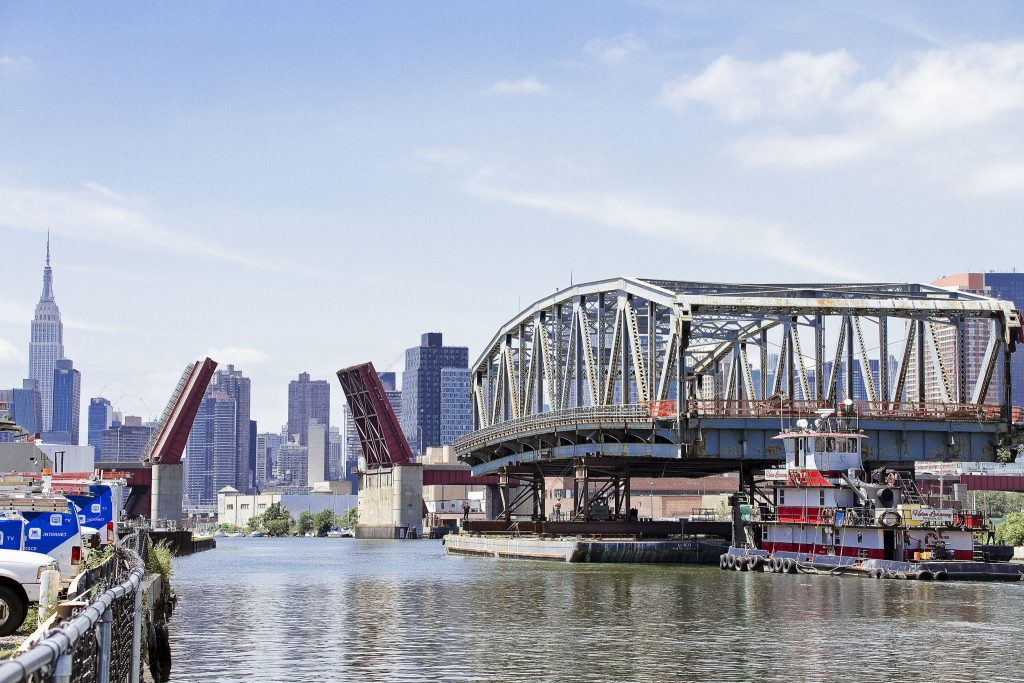 Post Demolition: A Second Bridge and Park Space
Completion Date: 2020
Once the old bridge is fully deconstructed the NYS DOT will oversee construction of a second span, which will mirror the existing new bridge. Once completed East-bound traffic will be transferred onto the newest section which will also include a bike and pedestrian path. There are preliminary plans for a park space on the Queens side of the new bridge (possibly to be named after NCA’s late historian and dedicated Newtown Creek advocate Bernie Ente). Early discussions for park space and a boat launch on the Brooklyn side are just beginning. Stay posted to NCA’s social media for updates on both opportunities.