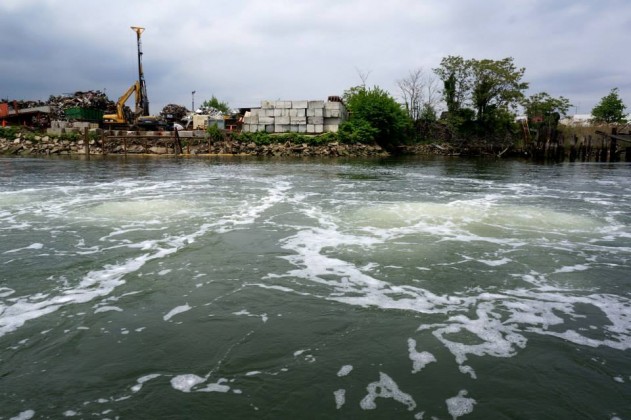 The NYC Dept. of Envionrmental Protection (DEP), under a consent order from the State Dept. of Environmental Conservation (DEC) have installed an aeration system in Newtown Creek to raise dissolved oxygen levels in the water above a required level of 3 mg/L to allow for fish survival. The system consists of blower buildings which pump air through long plastic pipes that sits on the creek floor. There are two aeration systems in place on the Creek: the English Kills system (fully completed in 2014) and the East Branch system (fully completed in 2018).

Since 2011, Newtown Creek Alliance and various partner organizations, including Riverkeeper, have sought to challenge the aeration project in Newtown Creek. To date, we have raised a number of concerns about the project including:

Unclear evidence on the need for aeration and effectiveness of the system in place. In examining recent DO levels from areas of the main channel of the Creek, we found that water is above the 3 mg/L threshold most of the time already, and at higher levels than other areas of NY Harbor (see 2016 data, 2015 data and 2014 data).  Additionally, we do not believe that aeration reflects current water quality realities within Newtown Creek. To illustrate we have created a chart showing data used as basis for requiring aeration (1984 to 2003) versus recent data findings (2014 to 2016) – see chart here. Additionally, it is unclear when the currently installed aeration is actually needed to reach the 3 mg/L threshold. The current aeration runs continuously from May through September without reflecting actual DO levels. Recent DEP data shows that low oxygen levels tend to follow CSO discharges, which is both a justification for investing in reduction of CSO and revising operation procedures of the aeration system.

The potential health impacts caused by aerosolizing bacteria and chemical contaminants that lie within the sediments and water column of Newtown Creek, a federally designated superfund site. DEP, DEC and Dept. of Health have all acknowledged the possibility of releasing pollutants into the air column but not taken action to properly assess it’s impact. In a public Queens Community Board 2 meeting, DEP did state that the Turning Basin area of the Creek was removed from original plans of aeration because of concern over highly contaminated sediments (a statement that was later verbally redacted years later). Areas in and near English Kills have hazardous levels of surface sediment contamination (PCBs, PAHs, etc) and the aeration system is clearly a transport mechanism that need’s to be properly studied.

Lack of long-term plan for use of the aeration system. While the removal of the final phase of planned aeration, NC-4, was approved by DEC as part of the Long Term Control Plan for Newtown Creek (2017), the existing aeration systems have no mechanism in place for regular evaluations by the regulatory agency. (See original aeration plan here).

Lack of engagement with communities that live near to and use the Creek for various purposes. To date, there has been no public meeting focussed solely on aeration. While the EPA and DEP have responded to questions and concerns about the project at Superfund CAG and Community Board meetings, the DEC, who has ultimate oversight and regulation of the project, has failed to discuss the project in a public forum.

Reliance on a mechanical solution that consumes large amounts of electricity contributes to further release of greenhouse gases (approximately 25,356 Kg CO2 per year according to a 2021 DEP evaluation) and works against city and state climate goals. Additionally, NYC is spending hundreds of thousands of dollars per year in maintenance to address a system that is prone to failure and damage.

2019 NCA Presentation to DEP and DEC

2018 NCA Presentation to DEP and DEC

Formal letters to and from agencies:

March 22, 2016 letter from NCA/Riverkeeper to USACE