The first project being created is The Fairy Rings, a mycroremediation project to filter toxins from the water through sculptural form. In European folklore, it was believed that the gathering and dancing of fairies and elves created fairy rings, circular discolorations or growth of mushrooms on a grass lawn. The belief transformed these spaces from reality into fantasy. Today, we now know fairy rings are a natural phenomenon created by fungi. In this project, oyster mushrooms are used for their ability to neutralize hydrocarbons that are present in petroleum products such as oil, pesticides, and herbicides; and because of their ability to act as a hyperacummulator to absorb heavy metals and common toxins found in urban environments. The sculptural form is an alliance between the material structure and nature. Nature participates through the ongoing process of the sprouting of mushrooms and the mycelium cleansing toxins from the water. Mycroremediation is a term and practice developed by mycologist, Paul Stamets.

Jan Mun, a media artist living in Brooklyn, NY. She received her MFA in Digital + Media at the Rhode Island School of Design and her BFA in Photography from SUNY New Paltz. She has been examining biological computing principles working with living organic matter. She is exploring the generative principles of how complex systems such as botany and fungi, economies, and social networks function and the effects of interactions between different entities, whether cultures, plants, or people. 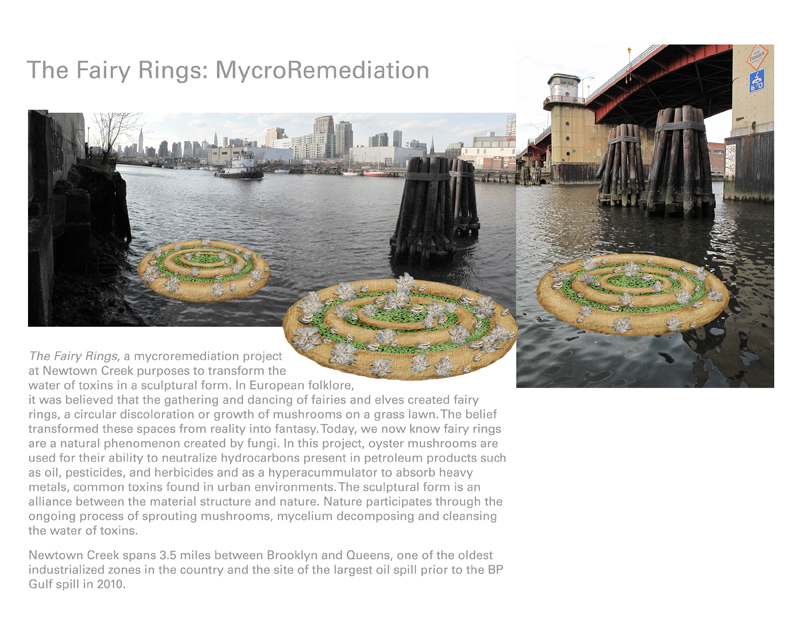 Jan is an amateur mycologist, microbiologist, and beekeeper working in collaboration with cultural anthropologists, choreographers, composers, activists, gardeners, engineers, and scientists to develop ways to communicate with each other and the larger public. She is working on a long-term project called ProfileUS: Invasive Species, which examines the biopolitics of the migrations of non-native plants and people in the United States and considers which populations are authorized to thrive and which are repressed through institutional laws. Using a combination of artistic and scientific processes, ProfileUS: Invasive Species is a social reflection and critique of our political and social systems.

Prior to working in new media, Jan has a background in traditional media, documentary photography and web products. She has worked with photographer Bruce Davidson for many years in Central Park and has worked in communities in Mississippi, Lebanon, Spain, and Kyrgyzstan developing photographic workshops. She will return to Kyrgyzstan this summer to teach a media workshop with the Open Society Foundation. Since 2004, Jan has developed web products for the United Nations, for which she won a Webby Award. In 2011, she completed the International Year for Forests website for the United Nations Forum on Forests.

Jan has attended residencies at I-Park, Mildred’s Lane, and MacDowell Colony. Her work has been exhibited nationally and internationally. This September she will be presenting her work at ISEA (International Symposium for Electronic Arts) in Albuquerque, NM: Machine Wilderness.